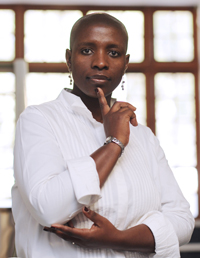 The new Ombud, Zetu Makamandela-Mguqulwa, is headquartered in the cottages opposite the School of Dance.

It's mid-morning on a Tuesday and UCT's new Ombud, Zetu Makamandela-Mguqulwa, is signing for furniture destined for her office in the cottages along historic Lovers Walk, opposite the School of Dance.

It's a quiet cul de sac, a good locale for an Ombud's headquarters; part of the campus but distinct and separate from the administrative functions. In this sense, it mirrors her own role as a designated neutral or impartial dispute resolution practitioner. Appointed as part of the university's broader transformation initiative, Makamandela-Mguqulwa is not 'part of the furniture' in the administration at Bremner.

Her office in Lover's Walk will accentuate what is so important to the job: the creation of a safe and informal space to be heard, an alternative to the other formal modes of dispute resolution at the university.

As she explained to members of the various university constituencies and community she has been visiting since early January, when she took office, she reports to the chair of Council, Archbishop Njongonkulu Ndungane.

Almost all universities abroad have such an office, she says. But South African institutions have been slower to act, with only three other universities hosting Ombud offices.

"The Ombud's office adheres to the International Ombudsman Association (IOA) Standards of Practice and Codes of Ethics. The tenets require that Ombud offices shall function independently of the organisation, shall be confidential and neutral, and shall limit scope of their services to informal means of dispute resolution," she said.

As Ndungane explained in his announcement of her appointment, the role of the Ombud has a long and honourable tradition as a safeguard against abuse, bias and other improper treatment or unfairness.

A UCT graduate, (she has a Bachelor of Social Sciences (Hons) from UCT and a Master's in Social Science from UWC) Makamandela-Mguqulwa was the transformation co-ordinator in the Faculty of Health Sciences from 2003 to 2006.

This is her third stint at UCT in a career that has been steeped in conflict management and resolution.

Now she's keen to get the message out to the community: the Ombud is here and the office is open for business.

This business is to establish a fair and restorative process in the settlements of disputes or disagreements.

"The underlying values are that disputes should be resolved in ways that reconcile competing interests, are relationship-enhancing, and are transformative."

Who sees the Ombud? All members of the UCT community, says Makamandela-Mguqulwa. As far as possible, people should be equipped to deal with conflict. The ultimate goal is to see all staff at UCT taking responsibility for their own engagement with the university. On the other hand, the university climate must enable this interaction to happen without fear of retaliation.

She also highlights an important difference between mediation and the grievance procedure.

"Mediation is a separate process from the grievance procedure and aims to move away from adversarial procedures to resolve issues as early as possible."

One of the pivotal skills of mediation is listening.

"Listening is a rare attribute; it comes from practice over the years. I'm a student of listening," Makamandela-Mguqulwa adds.

But she will not listen alone. To assist, Makamandela-Mguqulwa is able to call on 28 independently trained PASS and academic staff to act as mediators in the Ombud's office. All have made it through a competitive selection process.

How confidential is the mediation process then?

"All meetings are confidential. The only exception is where there is evidence of potential harm or any serious risk to health and safety. In those circumstances the Office of the Ombud will have the discretion to terminate the process."

And any personal notes taken by the parties or the mediators are destroyed at the end of the process.