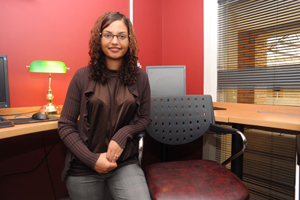 The Department of Commercial Law in the Faculty of Law has beefed up its staff complement by appointing new lecturers:

Afton Appollis completed both her BCom (financial accounting and law) in 2005 and her LLB in 2006 at UCT, and therefore is no stranger to the law faculty. After obtaining her LLB she completed her articles with Cliffe Dekker Hofmeyr and was subsequently admitted as an attorney, notary and conveyancer in February 2009. After working as an associate in Cliffe Dekker Hofmeyr's tax department for a further two years, and successfully completing her MCom in Tax, also at UCT, Appollis joined the law faculty in January 2011. Reading, cooking, the occasional crossword puzzle and good company are some of the less taxing activities she enjoys.

Rufaro Gweshe (pictured above)originates from Zimbabwe but is a familiar face in the law faculty. She graduated from UCT with an LLB in 2007 and subsequently undertook postgraduate studies on a part-time basis. She was appointed as a teaching and research assistant in the Department of Public Law, before joining the Department of Commercial Law as a lecturer in 2011. Gweshe lectures Business Law I and II, and her research focuses on individual and collective labour law. In her free time she is making the most of all that Cape Town has to offer, and is well on her way to becoming a true Capetonian.

Also, the Law Clinic has appointed Paul Anthonie as a new candidate attorney. Anthonie, who hails from Beaufort West in the Little Karoo, obtained both his BA in law degree and LLB at the University of Stellenbosch in 2007 and 2009, respectively. He has held various positions at the University of Stellenbosch, including administration assistant and assistant warden. Before that Anthonie worked as a petrol attendant in Beaufort West, a job, he said, that taught him how to deal with customers. He is keen on sport, soccer and rugby in particular.