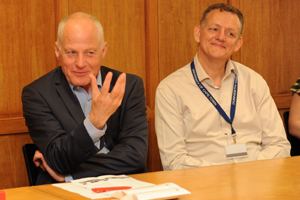 Deputy vice-chancellor Professor Thandabantu Nhlapo welcomed six Members of the European Parliament (MEPs) to UCT on 25 February; who were in the province to observe the most advanced tuberculosis vaccine clinical trial on infants in the world.

The trial, in Worcester, is being conducted by UCT's South African Tuberculosis Vaccine Initiative (SATVI), the world's leading TB-vaccine clinical research group, in partnership with the European-based Oxford Emergent Tuberculosis Consortium and the US-based group Aeras.

"UCT's mission is internationalisation with an Afropolitan niche," said Nhlapo, "which means our goal is to be internationally competitive while focusing on Africa. The European Union has been absolutely wonderful in supporting our mission."

The new vaccine was developed in Europe, so the MEPs were especially interested in hearing about its progress.

Vaccine developer Dr Helen McShane of Oxford University in the UK was also here to report to the MEPs. "So far," McShane said, "the trial has progressed smoothly, with no safety concerns experienced among the 2 537 babies vaccinated to date."

SATVI principal investigator Dr Hassan Mahomed added that the local community's positive response to the trial is due to their willingness to be part of the fight against TB, which is ravaging their community.

The trial, which has generated worldwide media attention, is expected to run until 2012.