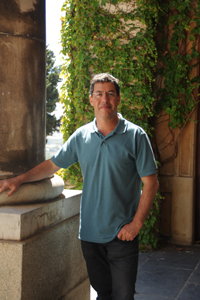 Acclaimed South African-born film and television director Paul Yule is back in the country for a three-month lecture programme for undergraduates at UCT's Centre for Film and Media Studies.

But before the first semester officially started, Yule was already at work in an outreach project, teaching an intensive two-week course on the rudiments of producing documentaries to aspiring filmmakers.

About a dozen students, hailing from as near as Khayelitsha and as far as Zimbabwe, and ranging in age from 17 to 58, had no option but to hit the ground running.

"It was a bit like boot camp," said Yule. "I told them the course would end with a film festival, and they were going to be the stars."

Each student produced a short documentary on a subject of their choice, which ranged from an elegiac film about commuter trains to a campaigning film about spousal abuse.

"The students were all highly motivated and had a lot to say, but without the means to say it - not so much on the technical side but in the know-how of framing a story. So this is what the course became about."

A motto for Yule is "being there isn't enough - you also have to have something to say".

"New technology is an incredibly powerful tool," explains Yule. "Now, film can be used to communicate to millions of people almost instantly. But the film audience has also become very sophisticated. Viewers want stories that speak to them with some depth. It's about the subtext, so that the really good films are not really about what they seem to be about at all."

Yule believes that the students, many of whom had all won a Nokia-sponsored competition in which they had to produce short movies with cellphone-shot footage, were transformed by the course.

"Aspiring filmmakers soon learn that they're working in a very collaborative medium," observes Yule. "Some people still think they can do it all on their own, but they're the ones who ultimately fail."

View a video of the interview.