Jazz for all tastes on SACM release 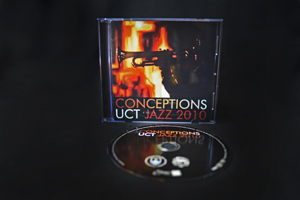 Everyone agrees that Conceptions: UCT Jazz 2010, the CD released late last year by the South African College of Music (SACM) to round off its centenary celebrations, has something for everyone.

Consider the offerings. There's the African-influenced harmonising of UCT Jazz Voices, trumpeter Marcus Wyatt showing why he's considered one of the most innovative jazz musicians working in the country, the intoxicating vocals of Melanie Scholtz and Amanda Tiffin, the sombre piano and saxophone pairing of and Darius Brubeck and Professor Mike Rossi, and the swaying-and-bopping sounds of the Mike Campbell Big Band, among other delights.

More than just a master class in jazz styles, Conceptions is also a showcase of talent emerging from and still with the SACM. Included in the line up are current lecturers Associate Professors Mike Campbell and Andrew Lilley, Jason Reolon, Rossi and Tiffin, and acclaimed alumni like Scholtz, Dan Shout and Wyatt. "It's a stellar cast," says James Grace, another SACM staffer and whose independent label, Stringwise Records, produced the CD.

The CD can be found at most music stores.