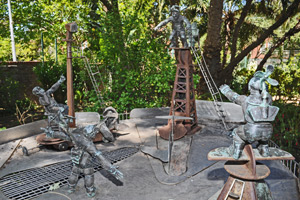 An important group of sculptures (comprising four interactive elements) with a footprint of about 100m2 has been unpacked on the new middle campus square. The 1994 work The Dog Watch, by acclaimed South African sculptor David Brown, was a gift from UCT alumnus Charles Diamond. Diamond, who commissioned the work some years ago, first offered it to the university in 2006, as he was moving from his estate near Henley-on-Thames, near London, UK, where it had been installed. Over the next few weeks the work will be reassembled and installed at its new home, under the supervision of Brown. There are several more works by Brown around the UCT campus, including sculptures in the chemical engineering building, in the Hoerikwaggo Building, in the Leslie Building, and in the Irma Stern Museum gardens (a maquette for The Dog Watch).

Artworks for the new middle campus buildings are being commissioned and purchased, and Christopher Peter, UCT's art curator and Director of the Irma Stern Museum, says that a Norman Catherine work has been purchased for the Student Administration building.

Special Projects
UCT is building for the future 06 Dec 2010