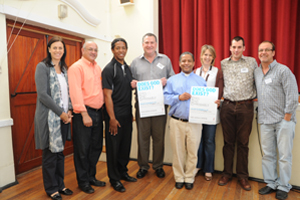 It seemed fitting that Christian societies and churches serving the UCT community met for the first time on World AIDS Day to devise a plan of co-operation.

Among their goals is to play a central role in UCT programmes, such as the campaign on HIV/AIDS, which strives to help staff and students who are affected and infected by the pandemic.

According to Reverend Christopher Swartz of the UCT Anglican chaplaincy, 75% of the support shown to the victims of the pandemic is faith-based, "and we would love to be part of that".

The churches and societies intend to contribute to other UCT initiatives, such as the Green Week, transformation and development of leadership among students. In that regard, they are working on bringing the international Alpha course to UCT in 2011. The course covers the basic tenets of the Christian faith, and tackles topical issues in a relaxed environment.

Swatz said the breakfast meeting on 1 December was a first step in a process to get churches and Christian societies working together to effectively work as a team. The ultimate objective, Swartz added, is to have an inter-faith co-operation in which Christians, Muslims and other religious groups work together.