Sci-fi comes down to earth at Open Day 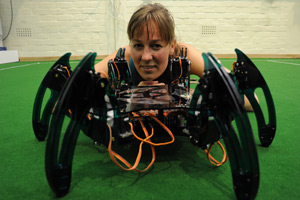 With displays raging from functional, socially responsible projects to designs that wouldn't seem out of place in a science fiction movie, the UCT Department of Mechanical Engineering Open Day on 16 November was the celebration of a long year's slog for final-year students.

A functional six-legged robot that can teach itself to walk was one of the stars of the event, its developer Leanne Robertson jointly taking the Best Project Award with Niel du Plessis, for his research on perforated plates as blast shielding in underground tunnels.

James Boonzaier claimed first place in the Best Oral Presentation Awards for his work on the reconstruction of cranial bones. His alternative solution to traumatic grafting procedures is the Crawler - a prototype device that uses distraction - pulling healing surfaces apart - to generate bone growth. Boonzaier explains that existing distraction devices have several shortcomings, which he hopes the Crawler will address.

Second, third and fourth places went respectively to Gary Mc Farlane for his design and construction of a stable flame burner; Adam Ozinsky for his project on the design, building and testing of blast-resistant polymeric sandwich panels; and Robertson for her knowledge-assimilating hexapod. All four students delivered short presentations on their work to a packed audience.

In his welcoming address, department head Professor Chris Redelinghuys noted that this was the department's 92nd Open Day, representing some 36 000 hours of student work.

"Each open day is an opportunity for students to showcase their work, and for the industry to forge new links with future leaders," said Redelinghuys.