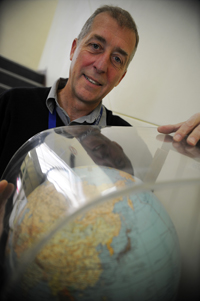 Around the world: Prof Mike Meadows keeps up with colleagues through the International Geographical Union, for which he will serve as secretary-general and treasurer for the next few four years.

Professor Mike Meadows of the Department of Environmental and Geographical Science will continue his association with the International Geographical Union (IGU) following his election, at a meeting in Tel Aviv, Israel, as both secretary-general and treasurer on the organisation's executive committee. While he affectionately describes the jobs as something akin to a "dogsbody", Meadows is also an ardent believer in the work of the IGU.

The organisation, founded in 1922, boasts over 90 national committees, and aims to promote the study of geographical problems and create research networks across the globe.

Through its collaborations the IGU is influential in setting the international research agenda in geography, says Meadows, and the networks, conferences and meetings allow him to keep his ear to the ground to what's happening in the discipline globally.

"The payoff for me is a selfish one," he says, "because I get to meet and work with people from many different parts of the world."

UCT Family Medicine registrars experience new ‘Hospital of Hope’ UCT’s Dr Abhaya Karki and Dr Nabeela Amien could not have imagined being part of a team that would set up a field hospital from scratch. 06 Jul 2020