Carpooling service for a greener campus 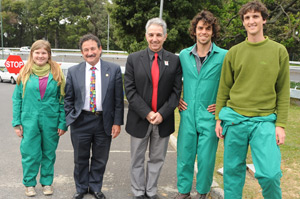 Hosted on Vula and freely available to anyone with a UCT student or staff number, Ridelink is a carpooling matchmaker service. Users are partnered based on their similar travel schedules and routes, allowing them to organise carpools easily.

The need for such a system became apparent when the GCI took an informal survey of 200 cars entering the Sports Centre parking area one morning and found that almost 90% of these vehicles had only one occupant. They calculated that if half these drivers began sharing lifts to campus, they would help free up 90 more parking spaces.

As an incentive to take advantage of Ridelink, the P4 parking lot (next to the rugby fields) will be reserved for multiple-passenger vehicles only. Access will be controlled by a boom gate operated by a UCT traffic official.

"We've been working on Ridelink for a year, so it's great to be finally launching it," says GCI's Kimon de Greef. "It's a part of UCT life now, so it's up to us to make it work."

Ridelink is supported by UCT's Properties and Services Department.