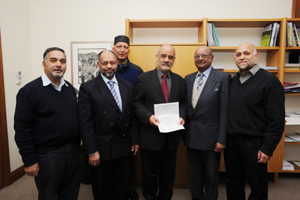 The Hospital Welfare and Muslim Educational Movement (HWMEM) handed UCT the latest in its annual a bursary cheque on 31 August. The donation will go towards the study fees of disadvantaged students.

Nazeer Khalfe, the movement's education secretary, noted that the cheque of R171 000 was but part of the R600 000 in donations that the HWMEM has dispersed to needy students at the four Western Cape universities this year.

The HWMEM is a community-based organisation that was established early in the 1940s to cater for the nutritional needs of Muslims at Somerset Hospital which later grew to a welfare programme for the community at large. It set up the bursary scheme in the 1960s with a nudge from its political stalwarts, who argued that liberation and education go hand in hand. Beneficiaries are struggling students of all races and creed who have the drive and attitude but may not necessarily have excelled in their primary and secondary studies due to their disadvantaged circumstances.

Receiving the cheque, deputy vice-chancellor Professor Crain Soudien said UCT appreciates the continued support of the HWMEM, adding that it was clear that the award comes from their hearts.