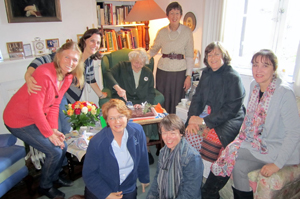 July was a red-letter month for Professor Paddy Harrison, who celebrated her 90th birthday with members and graduates of the Division of Nursing and Midwifery.

It wasn't all about a milestone anniversary; Harrison's contributions to nursing studies at UCT were not forgotten.

This doyenne's time at UCT began modestly in 1959 when, on secondment from Carinus Nursing College, she ran the Sister Tutor's Diploma. She was appointed as a lecturer two years later.

In time, Harrison would flesh out and strengthen nursing studies at the university. In 1972 she launched UCT's BSc programme in nursing, and 10 years later an MSc by dissertation. That same year, 1982, she was named the university's first Helen & Morris Mauerberger Professor of Nursing.

In addition to the UCT staff who celebrated Harrison's birthday, greetings and news came from graduates and past and present staff from around the globe. These were compiled into a book and presented to Harrison by Emeritus Professor Rosalie Thompson.

Graduates spoke with fondness of how well they were equipped in their undergraduate years, both for life and for their careers.