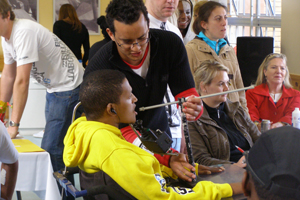 Firing line: A student helps a patient during a blow dart competition at the Western Cape Rehabilitation Centre.

It was fun, games and learning when UCT medical students hosted a blow dart tournament for patients with disabilities at the Western Cape Rehabilitation Centre recently.

The blow dart is similar to the normal dart game, but instead of throwing darts, participants use blowguns (also called blowpipes or blow tubes) to fire the darts (slightly different from the traditional games).

The third-year medical students organised the event as an initiative to give back to the community, and saw approximately 80 wheelchair-bound patients and 120 spectators from the Mitchell's Plain-based centre participating in the event.

The students also spent time in the centre interviewing patients, and learning how their neurological disabilities had changed and affected their lives. The centre receives paraplegic or quadriplegic patients after their discharge from hospital, and patients spend two to three months in intensive rehabilitation at the centre.

Many of the students who volunteered believed that the event was borne out of UCT's belief that doctors should be trained to look beyond a patient's immediate medical needs, and to see the patient as a human being with particular needs and constraints within a specific social context.