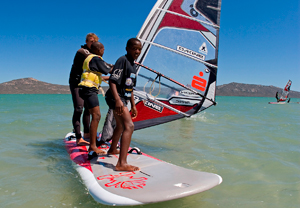 Water wise: Some of the learners on the Yacht Club's outreach programme get the hang of windsurfing during a session at Shark Bay in Langebaan.

The development initiatives of four UCT sport clubs enjoyed a welcome boost in the shape of a grant worth R770 000 from the National Lottery Distribution Trust Fund (NLDTF). The grant - the first stipend in a four-year award - will go towards the development programmes of the rugby, rowing, tennis and yachting clubs.

The biggest slice of the pie, over R551 000, will aid the youngsters on a Rowing Club initiative. Started some years ago by UCT students and the late Keith Hart, then with UCT Sport & Recreation, the outreach programme works with some 100 school learners. Such have been the benefits that the programme has since been adopted by Western Cape Rowing as its official development programme. Well over half (around R320 000) of the grant will be spent on indoor rowing machines, aka ergos, while the rest will cover coaching and transport bills, as well as the purchase of a coaching boat.

That programme introduced 10 kids (aged between nine and 13) from local townships to the sport. With the kids improving all the time, new kit was required, so most of the funding will be invested in boards, sail rigs, wetsuits and a trailer, while transport and coaching costs will also be covered.

Just under R27 000 is earmarked for the Tennis Club's programme, revived in 2008 by graduate Jessica Ellis after joining forces with Michelle Whitehead, founder and trustee of the Growing Tennis initiative. By 2009, Ellis, Whitehead and UCT students were running coaching sessions with hundreds of learners at seven primary and high schools in Cape Town. Ellis had at one stage bewailed the lack of kit, a shortcoming that the NLDTF money will go a long way towards setting right.

The final recipient is the UCT Rugby Club, more specifically its Ubumbo team, initially established by the club for UCT students from the Eastern Cape. Apart from playing in the UCT internal league, Ubumbo players also coach and mentor school learners in Gugulethu, Langa and Nyanga. The R24 000 in NLDTF money will be used for kit, but around half of that money will foot some of the programme's costly transport bill.