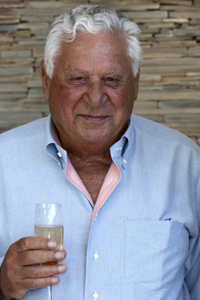 Mining entrepreneur, self-made billionaire, renowned horse breeder and famous for his eponymous wines, Graham Beck, died on 26 July at a clinic in London.

Beck, who would have been 81 in December, had been diagnosed with lung cancer in early 2010. A Capetonian by birth, Beck studied commerce and law at UCT from 1947 to 1952. During this time Beck established a home renovation business called Kangra, which is still name of Graham Beck Wines' holding company.

He later entered the coal mining industry, before establishing his reputation as a pioneer in South African wines. The flagship Graham Beck Brut NV was used in the celebrations for Nelson Mandela's presidential inauguration in 1994, and for Barack Obama's private celebration when he became the 44th President of the US in 2008.

Beck is survived by his wife, Rhona, who was with him when he died.