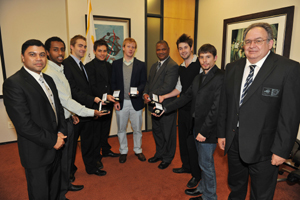 Cape Town Mayor Dan Plato has awarded the City of Cape Town Corporation Medals to top students from UCT's Faculty of Engineering & the Built Environment. The medals acknowledge the students' 2009 results, as Mike Marsden, executive director for transport, roads and major projects for the city, put it.

Faculty dean Professor Francis Petersen said UCT values its relationship with the city, in particular the contribution Marsden makes as a member of the faculty advisory board.