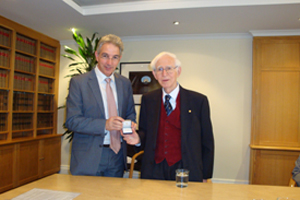 The Vice-Chancellor's Medal has been awarded to Sir Aaron Klug, OM, FRS, Nobel Laureate, and outgoing chair of the University of Cape Town Trust in the UK. VC Dr Max Price presented the medal during his visit to the country last week.

Price paid tribute to Sir Aaron's "enormous contribution" to UCT over the years. Sir Aaron was one of the founding Trustees of the UCT Trust and held the position of chair from 1993 until this year. During his time, over Â£17 million was raised for projects at UCT.

Price said Sir Aaron had brought the full weight of his scholarship, distinction and ethical reputation to the trust, and had always been available to give advice and guidance. His wife, Liebe, had also played a guiding role, behind the scenes.

After receiving his BSc degree at Wits, Sir Aaron studied crystallography under Professor Reginald William (RW) James at UCT and obtained an MSc degree. His PhD followed at Trinity College, Cambridge in 1953. In 1982 he became Nobel Laureate in chemistry, was knighted by the Queen in 1988, held the position of President of the Royal Society from 1995-2000, and became OM in 1995. He was awarded the Order of Mapungubwe (Gold) by the South African president in 2005.

This is his fourth UCT award, Apart from the President of Convocation Medal, Sir Aaron is a recipient of the Chancellor's Gold Medal of Merit (1982) and an honorary doctorate (1997).