Shain on Protocols - an anti-Semitic hoax 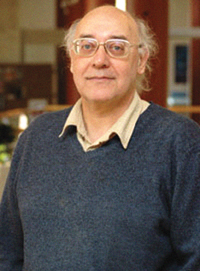 Warrant for Genocide: The Protocols of the Elders of Zion was Professor Milton Shain's topic for UCT's Gordon Institute for Performing and Creative Arts (GIPCA) Great Text/Big Questions lecture on 22 April.

Shain examined the history of The Protocols of the Elders of Zion, and the "warm reception it has received worldwide".

First published in Russian in 1903, The Protocols of the Elders of Zion has been described as the world's biggest literary forgery. But some still believe it is evidence of a Jewish plot for world domination, despite intensive research proving otherwise.

Used as an anti-Semitic, anti-communist and political propaganda tool in Russia, the USA and Nazi Germany, the text is still widely available in the Arab world, according to Shain.

Claimed originally to have been stolen from a secret Jewish organisation in the late 19th century, the so-called 'original' text has never been uncovered. Research indicates that The Protocols are a forgery, mostly plagiarised from a work of fiction by French political satirist Maurice Joly, titled Dialogue aux Enfers entre Montesquieu et Machiavel (A Dialogue in Hell Between Montesquieu and Machiavelli). This work was first published in 1864, and translated into Russian in 1872.

In the first English version, which first appeared in the US in 1919, the word 'Jew' was replaced throughout with 'Bolshevik'.

GIPCA director Dr Rob Baum said, "The Protocols of the Elders of Zion is a highly contentious and horrific hoax that emerges every few years. Its recurrence is itself cause for question. What makes inflammatory language - hate speech, directed at any people - so compelling?"

Shain teaches Modern Jewish History and is Director of UCT's Isaac and Jessie Kaplan Centre for Jewish Studies and Research. He has written and edited several books on South African Jewish history, South African politics, and the history of anti-Semitism.

For more information on dates and speakers in GIPCA's Great Texts/Big Questions series of lectures, visit the GIPCA website or email Ashley Miles.