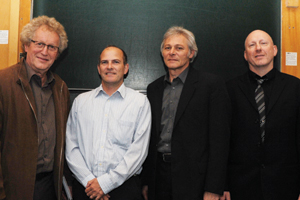 With two recent appointments the Department of Chemistry has filled all three of its named chairs, for the first time in several years. To mark this stroke of timing and design, the department hosted an Extraordinary Seminar on 20 April, titled Chemistry: State of the union, in which the three incumbents - Professors Mino Caira, Timothy Egan and Roger Hunter - reported on the current state of affairs in their respective fields.

So Caira, Professor of Physical Chemistry, spoke both of the "thread of theory" that runs through physical chemistry, and of the challenges facing the teaching of this sub-discipline; using publication and citation statistics as markers, Egan (the Jamison Professor of Inorganic Chemistry) talked of the promising recovery of research in inorganic chemistry in South Africa over the past 10 years; while Hunter, the Mally Professor of Organic Chemistry, compared UCT programmes with those of institutions in the UK, a comparison that sometimes favoured UCT, and sometimes did not.

The filling of all three posts heralds a new era for research and teaching of chemistry at UCT, said departmental head Professor Allen Rodgers.

"In appointing these three professors, the department is looking to them for leadership, for direction, and for expression of their own visions for the healthy progression of their respective sub-disciplines."