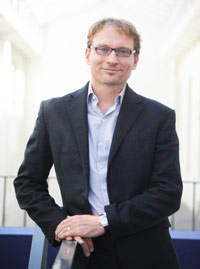 New blood: As the new director of research at the GSB, Assoc Prof Ralph Hamann has set himself some ambitious goals.

Associate Professor Ralph Hamann won't have many idle moments at the Graduate School of Business (GSB) anytime soon. In addition to his permanent position, which involves running an elective on sustainable enterprise on the school's MBA programme, he's also just been named as the GSB's director of research.

Research is a tricky area in a business school environment where the 'practical' elements of business are paramount - you can't run an MBA programme without those hands-on credentials - and where, at times, the relevance of research has not always been emphasized.

"There is a perception that research has not been such a priority at the school," Hamann admits.

But things are changing, he adds.

"The new director, Walter Baets, is putting a lot more emphasis on research, recognising that this is an area with much growth potential at the school. Also, there's increasing pressure on faculty to publish, and other staff and students are also beginning to recognise the value of research."

In addition, the GSB has identified five areas in which it wants to build a critical mass in research, all of which fit under the GSB's trans-disciplinary theme of Emergent Market Business. These are governance in emergent economies; diversity, dynamics and culture; entrepreneurial development and sustainable business; development, innovation and technology; and infrastructure, reform and regulation.

So it'll be up to Hamann - named to the position only weeks after joining the GSB from the university's Environmental Evaluation Unit - to find the common ground between the school's three concerns of teaching, research and social relevance. To this end, he's set himself a specific target: to improve the quantity, quality and visibility of published research.

He describes his main task as fostering a culture of research at the business school, and supporting researchers in their work. Over and above sitting on various committees, this will involve revitalising the GSB's series of lunch-time seminars, establishing an award scheme for publications, and developing a website dedicated to research at the GSB, among other things.

While there are a few prolific publishers in the GSB fold, Hamann hopes to especially nurture research by younger faculty and the school's growing number of doctoral students.

"I think there's a lot of potential among our emerging researchers, and we haven't really harnessed that sufficiently yet. There's also much scope for MBA students to contribute through their mini-dissertations, and demonstrating the practical relevance of good research might just become a further distinguishing feature of our MBA."

An award-winning publisher himself - he won the Hiddingh-Currie award for his co-edited book, The Business of Sustainable Development in Africa: Human rights, partnership and alternative business models - Hamann knows a few things about putting research to paper.