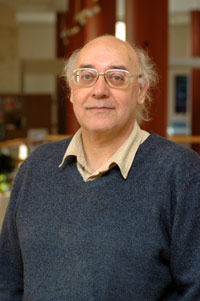 Place and Displacement in Jewish History and Memory: Zakor V'makor, a title co-edited by UCT's Professor Milton Shain, has been named as a joint runner-up in the anthologies and collections category of the annual National Jewish Book Award in the US, presented by the Jewish Book Council.

The book, which Shain edited alongside David Cesarani and Tony Kushner, emerged from a joint conference of the same name hosted at UCT in 2005 with the Parkes Institute for the Study of Jewish/Non-Jewish Relations at the University of Southampton. The theme of both the conference and the book is place and displacement in the Jewish experience and in the construction of Jewish identities.

UCT contributors to the book include Shain, who is director of the Isaac and Jessie Kaplan Centre for Jewish Studies and Research; Professor Richard Mendelsohn of the Department of Historical Studies, who penned the chapter with Shain; Veronica Belling, senior librarian at the centre; and master's graduate John Simon.

The National Jewish Book Awards, now in its 59th year, is the longest-running programme of its kind in North America. "This is a prestigious prize, recognised by Jewish Studies scholars across the world," said Shain. "It is a great boost to the Kaplan Centre and we are honoured."