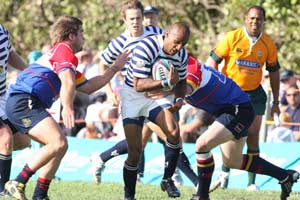 Battling it out: Ikey Tigers' Marcello Sampson attempts to break through Johan Swartz of TUT Vikings during a Varsity Cup clash between the two sides at UCT on 22 February.

In spite of producing what has been called their worst performance of the year, UCT's Ikey Tigers extended their unbeaten run in this year's FNB Varsity Cup when they beat Tshwane University of Technology's (TUT) Vikings by 25-19 at UCT on 22 February.

The win boosted the Tigers' chance of a semi-final spot as they are second in the standings on 15 points - five points adrift of champions and bitter rivals, Maties from Stellenbosch University - with only three games remaining.

The error-riddled encounter, played in strong south-easterly winds, saw the determined Vikings, who are second from bottom, holding Tigers 16-all going into the break. This was after the Ikeys wasted no time to open their account, Tim Whitehead strolling over the goal line within 90 seconds after some half-hearted tackling from Vikings.

Matt Rosslee made it 7-0 with the conversion. TUT centre Jaco Oosthuizen then scored three penalties in the space of 12 minutes, with Rosslee replying with a penalty in between to take the score to 10-9.

The Pretoria side then took the lead, much to the home crowd's disbelief, when captain Emile Verster touched down with Oosthuizen converting (10-16). Roslee added two more penalties to put the sides level at halftime.

The Ikeys flyhalf put his side in front with another penalty on the 48th minute, but Oosthuizen, having returned from the sin bin, levelled the scores - again - as the end of the third quarter approached. Replacement back Doug Mallett, the third kicker employed by the home team, then slotted a penalty from 60 metres out, and Rosslee added his fifth penalty of the evening to make it 25 '“ 19.

The UCT side will need to improve their game going into their next two away games against fourth-placed University of Johannesburg, who are breathing down their necks on 13 points, and pacesetters Maties.