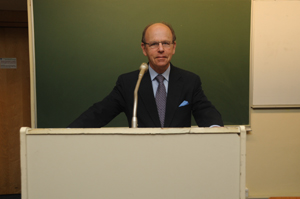 UCT celebrated 150 years of the teaching of law in South Africa in 2009, the first lecture having been given on March 18th 1859. As part of the Law 150 celebrations, Ben and Shirley Rabinowitz established a Visitorship with the aim of bringing leading lawyers - academic or practising - to participate in the intellectual life of the faculty.

Dean of law Professor PJ Schwikkard thanked the donors for their "generous and innovative" gift, saying that the Visitorships dovetailed perfectly with the faculty's plans to develop a diverse learning and research environment.

"'What is also so special to us, Jeffrey, is the close relationship that you have maintained with your alma mater, as Honorary Professor for a number of years and then as initiator of the exchange programme for talented black academics with your faculty at the University College, London (UCL)."

Schwikkard said that having one of the UK's leading public lawyers as the first Visitor had set the bar very high.

Jowell, who studied further at Oxford and Harvard, has for the past 35 years been Professor of Law at UCL and is a practising member of the English Bar.

In his lecture, The rule of law and the power to prosecute, Jowell identified two criteria in terms of which there was a discretion not to prosecute: where there was insufficient evidence, or where the public interest demanded no prosecution. There was, however, an increasing trend internationally to allow the courts to review such decisions in contentious circumstances, such as arms deals.

Jowell was also the guest speaker at the faculty's student function to mark the opening of the academic year. He is also lecturing to LLB and LLM students in the Department of Public Law.