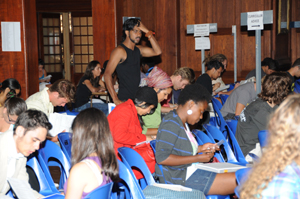 Registration commenced this week with the Faculty of Humanities, the university's biggest faculty, leading the way by registering locally-based returning students on 25 January. Described by faculty manager Laureen Rautenbach, as the "most pressured time of the year", the process began in Jameson Hall where lines of students filled in registration forms and looked anxious to get it all over and done with.

Staff, including the dean, Professor Paula Ensor, were on hand to provide career advice, and to ensure that the forms were completed correctly.

Rautenbach explained that as the faculty has the most number of departments, it takes some doing to check that the students' registrations conform with the faculty curriculum rules. Adding to the pressure was the fact that the release of the National Senior Certificate results was delayed by a week, and that this year's term has been moved a week earlier to accommodate the FIFA Soccer World Cup tournament in June and July.

While one student described the registration process as "quick and helpful", another had a proposal that he believed would cut down on the long queues.

"The process could be much faster if everything was done online," he said, asking to remain anonymous.

Registration extends to other faculties on 27 January, and will go on until 3 February.