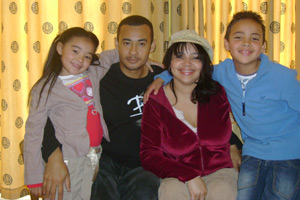 Close-knit: The Solomons family of Zoe, Zane, Marilyn and Luke.

Not many people tackle an undergraduate degree at the watershed age of 40. Fewer still have to overcome life threatening cancer in the process.

Zane Solomons is a man who achieved both these feats.

Solomons' wife Marilyn, a research administrator at the Department of Pharmacology, says it was "a huge shock" when Solomons was diagnosed with colon cancer during his fourth year into a BSc in Audiology.

"It was the last thing we expected, and it was a very difficult time for us," she recalls.

But Solomons was operated on at Groote Schuur Hospital, with good results, although he still undergoes a check-up every six months.

A proud Marilyn says her husband will do his year's community service at the Red Cross Children's Hospital next year, and is looking forward to the challenge.

Solomons completed his matric in 1987, but didn't study further at the time.

"We decided that one of us needed a degree, and the responsibility fell on Zane," his wife says.

He was working as an administrator at Telkom at the time, and it was a "huge challenge" to start studying, so many years after leaving school.

"It was very tough for both of us, but we are now so pleased we persevered to the end," she adds.

A dozen wild horses and a herd of angry buffalo couldn't keep her away from his graduation this week. And not only that, but she has obtained extra tickets for their two children, Luke (11) and Zoe (8) as well.

Now, Marilyn says, she is looking for another ticket - for Solomons' 83-year-old mom, who is as proud of him as his wife is.