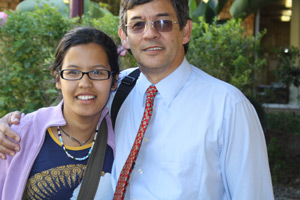 For everything, there is a season ...

In the turbulent, apartheid South Africa of the 1970s, severe limits were placed on the number of coloured and Indian students at medical schools across the country.

Professor Greg Hussey, Deputy Dean for Research in the Faculty of Health Sciences and director of the Institute for Infectious Disease and Molecular Medicine at UCT, was one of the relatively few who got in.

But when Hussey earned his medical degree, in 1974, he never graduated. Instead, as a protest against the apartheid government's decree that coloured and black South Africans had to receive permits to attend medical school, Hussey refused to attend his own graduation ceremony.

Later this month, in what is bound to be a particularly emotional - not to say poignant - moment, Hussey will cap his eldest daughter, Hannah, 25, when she receives her own medical degree. How the times they are a 'changin', to paraphrase Bob Dylan's famous ballad.

Hannah, he says, "is part of the new generation". She attended high school with no restrictions and, unlike black and coloured medical graduates in her father's time, she can work wherever she chooses.

Hussey recalls that at the time of his graduation, coloured students were denied access to parts of hospitals where white patients were being treated. This rule was even extended to post-mortems.

Now, of course, so much has changed, and apartheid has been relegated to the scrapheap of history.

"Naturally, the most important change a democratic South Africa brought with it is that we all have the vote," says Hussey. "Technically, coloured South Africans are no longer third-class citizens. But the new apartheid is financial discrimination. There is no doubt that this still exists, and the challenge now is to overcome it."

Hussey says there was therefore a natural tendency for Hannah to choose medicine as well.

The memories of his own very different student days will no doubt come flooding back when this proud father caps his doctor daughter and sees her walk into a bright new tomorrow.