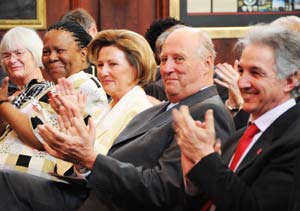 Global challenges require global solutions, and the time has come for South Africa and Norway to examine how to consolidate and develop their co-operation, Queen Sonja of the Royal Norwegian Family said at UCT on 26 November.

Opening the seminars on Co-operation in Research and Higher Education, Queen Sonja said research is dependent on sharing knowledge and ideas. In this regard, she thanked the scholars and students present, saying that through their work, solutions could be found to pressing problems.

Since 1995, South Africa and Norway had enjoyed extensive co-operation in various fields such as science, energy and medicine, she said. "With the opening of today's seminars, the two countries are entering into a new phase in strengthening that partnership."

At the seminars, topics such as climate change, environmental awareness and science will be examined.

In response, Naledi Pandor, Minister of Science and Technology, said the government agreed with Norwegian Prime Minister Jens Stoltenberg that there is a relationship between global warming and poverty.

Global change is deep and demanding, and we believe we can't fight poverty without attending to energy needs," she said. "We can't stop developing the world, but we can find ways to control the emission of greenhouse gases."

Norway is a world leader in clean technology and South Africa could learn from them, Pandor said. She added that the government is excited about the carbon capture agreement signed between Sasol and Norway's Gassnova SF.

Vice-chancellor Dr Max Price noted that the relationship between the two countries provides a platform for Western Cape universities for international research partnerships and co-operation.

Listen to the podcast and watch the video clip of Queen Sonja's address.