Global award for Machel and Mandela 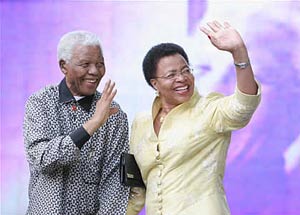 UCT chancellor, Graça Machel, and her husband, former president Nelson Mandela, have won a top international accolade for promoting children's rights over the past 10 years.

Machel and Mandela will get half of the £1,1million (about R12, 1 million) prize of the Decade Child Rights Heroes Award, with the other half shared by the 12 other winners.

The Swedish Children's World Association has been awarding the annual World's Children's Prize for the Rights of the Child, for outstanding contributions in defending the rights of children and youth, since 1999. This year, it was turned into the prize of the decade to celebrate the award's 10th anniversary, with candidates picked from previous winners. Machel and Mandela won the annual prize in 2005 for their work in Mozambique and South Africa, respectively.