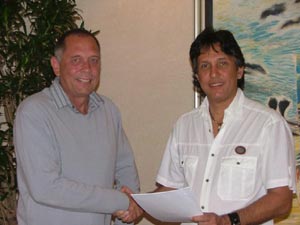 Putting their weight behind biodiversity conservation, the Rotary Club of Umhlanga in KwaZulu-Natal has agreed to provide a bursary for a conservation biology master's student at UCT each year for the next two years.

The master's programme is offered by UCT's Percy FitzPatrick Institute of African Ornithology, which will celebrate its 50th Anniversary in 2010.

"Developing Southern Hemisphere countries hold much of the world's biodiversity, yet are sadly lacking well-trained conservation biologists who can advise on the management and conservation of these globally important resources," said the Fitztitute's director, Professor Phil Hockey.

The need to build capacity in this field was recognised in the early 1990s and since 1993 the Fitztitute has run its highly successful MSc Programme in Conservation Biology. The programme has graduated some 200 students, with 85% of them employed in the conservation field. In the late 1990s, large numbers of African students were also trained and many of these alumni hold top jobs in the conservation arena.

The programme's success was also highlighted in a 2008 analysis published by top journal Conservation Biology. This identified UCT as the Southern Hemisphere's front-runner in conservation science, ranking equal with the fourth-rated university in the United States, and ahead of heavyweights such as Harvard, Stanford and Yale.

"The support for a conservation biology master's student each year fits well with one of the Rotary Club of Umhlanga's themes, Save Planet Earth, and thus we will value our partnership with the FitzPatrick Institute," said Greg Daniel, president-elect of the Rotary Club of Umhlanga. "Ultimately, we want to make a difference in securing South Africa's precious natural assets."