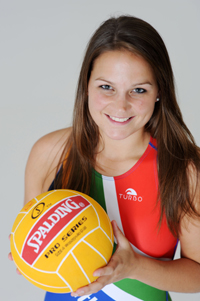 Like many others there, Laura Barrett had a few Bambi-in-the-headlights moments at the 13th FINA World Aquatics Championships, held in Rome over July and August.

There she was in one of the world's most beautiful and popular cities, appearing in only her second international event with the senior South African water polo squad. The state-of-the-art Foro Italico sports complex - big screen and all - was unlike anything she'd seen before.

And was that Michael Phelps strolling around the Village Roma09?

In the water, the team had been thrown into the deep end as well. Placed in the 'Pool of Death', South Africa was up against tournament favourites Canada and Australia (who would finish second and sixth respectively).

Barrett had to compete against women twice her size, some sporting Olympic tattoos.

"It's something I couldn't have prepared for because I didn't know what to expect," says Barrett, 23. "The game wasn't just faster, but so much more physical - they were on you all the time."

Just as they'd done at the FINA World League event in Lille, France, two months before, the ill-prepared South Africa - Barrett met at least one teammate for the first time at the opening match - had to settle for the wooden spoon. But Barrett's far from throwing in the towel.

"I just tell myself I'm going to learn from this," she says. "I'm here and I'm going to play. Even if it is against Australia."

And as coach to youngsters at Rustenburg Girls' High School and in the Western Province school squad - plus baby sister Nicola, 16, who represented the SA juniors in Russia this year - she has the chance to nurture the next generation of water polo talent.

"I'd like to see those girls, who have that love and that passion for the game and are good enough, to carry on from here."

As for her own game, the 2016 Olympics is still within reach, she believes. Then she might just get a tattoo of her own.