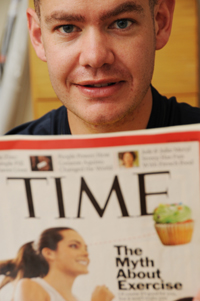 Couch potatoes of the world had a field day when a recent Time Magazine article suggested - perhaps more than suggested - that not only will exercise not make you lose weight, but it may actually help pack on the pounds.

The 9 August article, Why Exercise Won't Make You Thin, explained that the problem lay with "compensation", people tucking into kilojoule-packed muffins and pizzas as just desserts for a run or an hour at the gym, or because their appetites are jacked up. Also, people tend to cut out spontaneous activity - they'll take the lift rather than the stairs - once they've spent an hour in the morning on the Stairmaster.

As evidence, the article cited, in particular, a study with 464 overweight women, published by Dr Timothy Church in the open-access journal PLoS ONE of the Public Library of Science, that showed that the women who exercised - they were on different regimes - lost no more weight than those who didn't.

Among those to take issue with the Time article are sports scientist Dr Ross Tucker and specialist scientist Dr Julia Goedecke, both affiliated with the Medical Research Council/UCT Research Unit for Exercise Science and Sports Medicine. At a recent seminar they pin the blame for the article's findings on either flawed or misrepresented studies.

Church's study, for example, was designed to monitor the effects of exercise on blood pressure and stress on postmenopausal women, and so had little to say about exercise regimes aimed at weight loss. Also, the exercise prescribed in other studies quoted in the article was either not monitored or was barely enough to make subjects break a sweat.

Given that those who exercise pick up muscle mass as well, gauging overall health by the bathroom scale may be misleading, explained the scientists.

But other studies have shown clearly, Goedecke added, that weight loss by exercise alone is possible. These exercise-intensive studies are, however, hamstrung by high dropout rates, suggesting that adherence - for those in studies and everyone else - is critical.

"Be patient," suggested Tucker. "It's amazing how many people, I suspect, stop just before the going gets good."

For those who worry that exercise will simply trigger eating fits, studies have shown vigorous exercise in fact dampens post-exercise appetite. As for the compensation effect, yes, it is indeed common, said Goedecke.

"But this can be easily overcome and is all a choice about what we do in our lives."

The solution is commonsensical, agreed Goedecke and Tucker.

Just stick to both.