Arts festival lights up the town 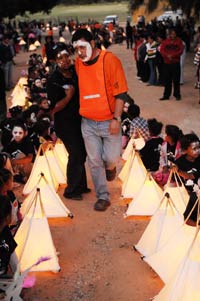 There's a story doing the rounds at the annual Clanwilliam Arts Project that some people have never heard Associate Professor Mark Fleishman (left) speak in a normal tone of voice.

That's because in marshalling 600 or so children (up from the about 150 when the project first started nine years ago) plus a small army of assistants, Fleishman, head of the Department of Drama at UCT, is usually found bellowing orders at the top of his voice or through a loudhailer.

No one seems to mind, though, as the project, made up of a weeklong workshop that culminates with a lantern-lit procession through the Clanwilliam streets and a showpiece performance, is a highlight on the town calendar. The performance includes traditional /Xam storytelling elements such as fire dancing and music, as well as more contemporary techniques such as shadow puppetry, arts and crafts and, this year, a huge fireworks display.

Each performance retells a story selected from an archive of San narratives recorded by linguists Lucy Lloyd and Wilhelm Bleek over 130 years ago. This year, the story was that of the resurrection of an ostrich and - the moral of the show - how it protects its young from a wily hyena and a jackal.

Funded by the Fairheads financial services group, the project calls on expertise from UCT, Magnet Theatre and Jazzart Dance Theatre.

It's exhausting work at times, admits Fleishman. "But, I suppose, despite the stress, at the end of the day, it's quite a rewarding experience to see how the learners and the townspeople respond to the festival," he says.