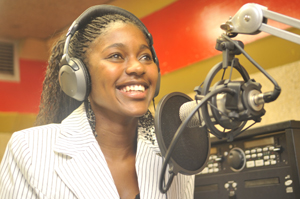 This month sees UCT Radio embark on a campaign to put women under the spotlight (the link is Women's Day on 9 August) and listeners are being invited to take part by sharing their personal stories and debating topics such as femininity and stereotypes.

Hope said she hoped to diminish the idea that superwomen were necessarily "CEO-types".

"Women in communities all over South Africa also deserve to be saluted. They are the ones selflessly effecting changes and leaving legacies where others might have cursed their circumstances."

Hlope said the idea of a woman's rightful place has shifted from "archaic placement" to social need.

"Sigmund Freud said: 'A woman should soften a man, not weaken him'. So we'd like to value the men who have stood by, protected, provided for and loved the women in their lives."

Guest interviews include Kopano Matlwa, UCT's award-winning novelist. On 9 August there will be a special broadcast from Colleen's Place in Mitchell's Plain, a community outreach initiative in which 20 children are cared for in a home in the community.

To hear their broadcasts, keep your dials locked onto 104.5FM.