New mission – take UCT sport to the next level 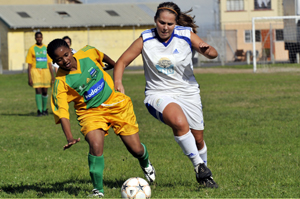 Abosberaad on UCT sport, hosted by UCT Sports Council on 1 August, was something of a no-brainer. Students and administrators who attended saw eye to eye that student sport here can and should be taken to the next level.

"There was consensus that we want things to change," says Angus Morrison, chair of the UCT branch of University Sport South Africa (USSA).

For now, excellence and success top the to-do list. But, cautions Morrison, those concepts mean different things to different clubs.

For some clubs success will be measured by the silverware they win. For others, taking a more professional approach means getting people on board to help with finance, sponsorships and organising tournaments. Still others will want to attract more students to participate, if only at a recreational level.

Professor Michael Meadows, chairperson of the UCT Sports Council, agrees that change will be a matter of different strokes for different folks. However, he is one of those keen to see UCT clubs bag more trophies.

"The focus of sport at UCT has been on participation, and I didn't want to change that; on the contrary, the more people who participate, the better, surely," he says. "But there is an opportunity, I think, to develop sport - in some codes, at least - to a higher standard."

That will have a two-pronged advantage, he believes. For one, it would be a boon to marketing UCT in general, as illustrated by the success of the televised rugby Varsity Cup. But it would also encourage more students to participate in those sports that are seen to be more successful.

Neither Meadows nor Morrison see UCT going the way of other institutions, by offering princely sports bursaries and the like. ("There was not a single person who supported the idea of pay-for-play," says Morrison.)

Meadows, instead, would like more clubs to tap into existing UCT resources, some begging to be called on. These include the expertise of those at the UCT/MRC Research Unit for Exercise Science and Sports Medicine (ESSM) and, possibly, the School of Management Studies, which offers a postgraduate diploma in sports management.

These groups were represented at the bosberaad by Professor Tim Noakes of ESSM and the Sports Science Institute of South Africa (SSISA), and David Maralack of the School of Management Studies.

Between them, ESSM and the SSISA offer access to one of the best facilities in the country and some of the best brains in the global sports-science field, says Ross Tucker, sports scientist and management consultant with ESSM.

Incorporating that kind of expertise into UCT sport could raise the standard considerably, he says, and is the first step towards a process of creating a leading sports brand at UCT.

"You can start to approach world-class levels by doing the right things, or by doing better things."

(For ESSM, a partnership with UCT sport will provide an opportunity to develop a blueprint that shows how intellectual capital can work for the benefit of athletes, a model that can be parcelled out to all sports across the country.)

John Donald, manager of Sport and Recreation at UCT, is a longtime and vocal champion of the 'participation' ethos of student sport. But even he concedes that, given the means to do so, there may be a compromise position.

"The danger is that we lose sight of what our core business is - our own bona fide students and the depth and breadth of the current student experience - in favour of opening our clubs to all and sundry in order to aspire to national titles," he says.

This approach would also compromise the governance model currently in place, where students are responsible for the running of the clubs, Donald adds. (That's a model that would have to stay in place, agrees Meadows.)

It was unanimous among those at the bosberaad, though, that opening clubs "to all and sundry" would not be the UCT approach. If clubs were to be allowed to sign up non-UCT students, there would be caps on how many and even how 'non-student' that person would have to be, says Meadows.

But much of the nuts and bolts must still be clarified. For now, the first thing that the Sports Council will do is draw up a sports policy that includes a mission and vision for UCT sports. The UCT sports constitution covers plenty of the minutiae of how clubs should be run, but contains no big-picture philosophy, notes Meadows.

"It's important," adds USSA-UCT chair Morrison, "that the values of UCT student sport are represented in that new mission statement."

It's those values that would help UCT lead the field in South Africa. Just what everyone wants.