Keep your oath, even when it hurts 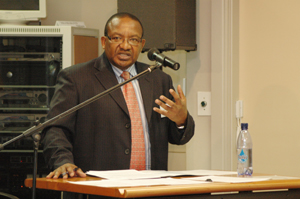 Outgoing: Advocate Vusi Pikoli delivered the opening address of the international conference on accountability at UCT.

Accountability on the African continent was the focus of an international conference at UCT, held from 20 to 24 July.

Attended by forty prominent thinkers representing academia and civil society as well as judges from across Africa and Europe, the conference was part of an ongoing collaboration between UCT, The University of Dar es Salaam in Tanzania and the University of Warwick in the UK.

In his opening address, the recently-fired national director for public prosecutions, Advocate Vusi Pikoli, spoke with passion about the power that prosecutors hold, noting that this power can literally ruin people's lives. And so, their "discretionary powers have to be exercised fairly and impartially so as to enhance public confidence in the administration of criminal justice".

Acknowledging that the position of a prosecutor in Africa is a hazardous one, Pikoli's closing words, drawn from Psalm 15, were, "To all prosecutors I say, keep the oath even when it hurts."

1992 saw the reclamation of an independent prosecuting authority, and this was confirmed by the adoption of a democratic constitution. But it was Section 33 (1) of the National Prosecution Act, which states that the Minister "shall – exercise final responsibility over the prosecuting authority", that was cause for some debate.

For Professor Pierre de Vos of UCT, this should be read within the framework of both the prosecution policy, which enshrines concepts such as the public good, and the Constitution, which safeguards the independence of the prosecuting authority.