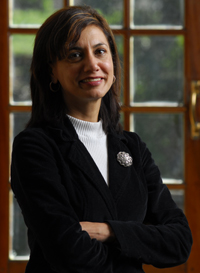 Her appointment follows the resignation of Professor Calie Pistorius.

Though the date of her appointment is yet to be confirmed, De la Rey, who is currently chief executive officer of the Council on Higher Education, said the knowledge she had gained during her term at UCT would be vital in her new role.

"My experience at UCT will be very important for what I will be doing, especially working in a complex environment with different stakeholders and different challenges," she said.

De la Rey is the second former UCT deputy vice-chancellor to land a vice-chancellorship. Professor Martin Hall, who took the reins as DVC at the same time as De la Rey in 2002, started his official term as vice-chancellor of the University of Salford in the United Kingdom in 2009.

De la Rey said she was "honoured" by the opportunity to lead such a large and complex university, but that transformation would be one of the key challenges, as it is at UCT.

Women are a minority in the public higher education sector, she said, but her appointment indicates that the sector is headed in the right direction in terms of gender representation.

"But we still have a long way to go," she noted.

De la Rey also serves on the Council of the Botswana University of Science and Technology, on the National Advisory Council on Innovation, the Oppenheimer Memorial Trust and the national Science, Engineering and Technology for Women Committee.

A Fellow of the Psychological Association of South Africa, and a member of the Academy of Science of South Africa, she also holds a Visiting Professorship at the University of the Witwatersrand.

In her declaration of intent, De la Rey said: "There is a sound base from which an exciting future can be built to realise the vision to be South Africa's leading academic institution, renowned for the quality of its teaching and student life, outstanding research, diversity, innovation and public engagement."

Vice-Chancellor Dr Max Price said he was delighted by her appointment.

"There are significant challenges facing tertiary institutions in this country and I look forward to working with Professor De la Rey on tackling these at macro and institutional levels. The University of Pretoria is a formidable sister institution and has a significant role to play in securing higher education for a growing number of students and preparing them to play their role in Africa and internationally. Professor De la Rey will be a huge asset to the University of Pretoria, as she was at UCT."