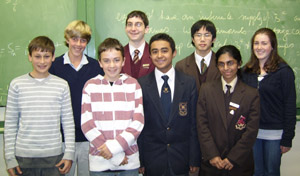 Cape Town's top young mathematicians will take part in the Invitational World Youth Mathematics Inter-City Competition, to be held in Durban from 5 to 10 July.

The Inter-City Competition is open to teams from junior high schools (up to grade 9). A total of 59 teams from 19 countries will participate.

Two teams from Cape Town have been invited, chosen from the top grades 8 and 9 participants in UCT's flagship Mathematics Competition, held in April.

The team leader is UCT's Phil Labuschagne and his deputy is Carl Fourie of Elkanah House.

To prepare, the teams are attending a week-long training programme at UCT during this first week of school holidays.