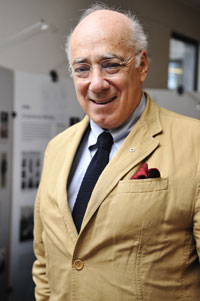 A leading scholar of French, Holocaust and modern Jewish history, Marrus has made seminal contributions to the study of the history of anti-Semitism. Among his books is The Holocaust in History - a well-regarded historiographical survey which tackles the origins of the Holocaust.

Delivering a series of lectures at the centre, Marrus spoke on his latest book, Some Measure of Justice: The Holocaust Era Restitution Campaign of the 1990s, which will be published shortly.

Marrus argues that the Holocaust should be seen as a tragedy for all humanity, not only for Jews.

"The book's subject links with South Africa's preoccupation with reconciliation and restitution," says Marrus. "Distinct points of contact can be made, and the more we broaden these issues to the global environment, the better."