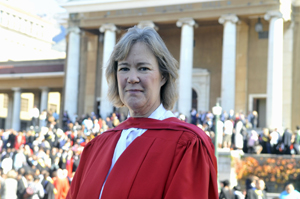 Dr David Russell's decades-long fight against apartheid was honoured by UCT when he was awarded the President of Convocation Medal at the graduation ceremony on Friday 12 June.

The medal is awarded annually to UCT graduates who have brought credit to the university by their contributions to the wider community. As a young priest in the 1970s, Russell, a former Anglican Bishop of Grahamstown who obtained his BA and PhD in religious studies from UCT in 1959 and 1985, respectively, made headlines as a prominent anti-apartheid activist, long before churches spoke out strongly against the apartheid regime.

He gained world prominence for lying down in front of bulldozers to protest against forced removals of people of colour from segregated areas in Dimbaza in the Eastern Cape.

Professor Judith Sealy, head of the Department of Archaeology, received her UCT Fellows Award at the science graduation ceremony on Friday 12 June. Sealy was abroad at the time of the previous graduation ceremony, at which the award would have been conferred.