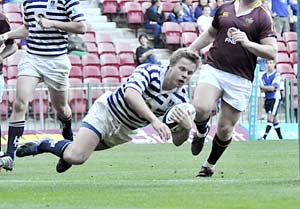 Trying hard: Flyhalf Matthew Rosslee touches down for UCT in their 16-16 draw against Maties in the weekend's intervarsity.

In what was the most evenly balanced intervarsity in recent memory, the FNB UCT First XV and the University of Stellenbosch's Maties played to a 16-all draw at Newlands Stadium on Saturday, May 9.

For once, Maties did not hog the ball, or camp out on the UCT goal line for extended periods. Well, not after the first 20 minutes anyway, when a Maties try - taking their early advantage to 8-0 - spurred UCT into action.

By half-time, a penalty, a smartly-executed solo try and conversion by Matthew Rosslee took UCT to a surprise 10-8 lead.

Two more penalties by Rosslee saw UCT, halfway into the second half, to a 16-8 lead. Not a comfortable margin by any means, but certainly - what with some errors slipping into the Stellenbosch game - not what the bookies would've read in the tea leaves that morning.

But, true to form and their formidable street rep, Maties staged a late comeback, knocking over a penalty and touching down once to level the scores at 16-16. Not so true to form was their failure to press home the advantage, missing both the conversion and a kickable late penalty.

Once again coach John Dobson had to watch the intervarsity crown slip through his side's fingers.

"I think we played poorly - we made far too many handling errors and then slipped too many tackles in those last 15 minutes," Dobson told varsitycup.co.za on Monday. "If you make those sorts of mistakes against a team like Stellenbosch, you are not going to win.

"For me, it's just frustrating that in our last two big games, against Pukke and now Maties, we have squandered what looked like winning positions."

Following the draw, UCT now lies third on the WP Super League on 16 points, with Hamiltons (23) and Maties (20) still well in their sights.