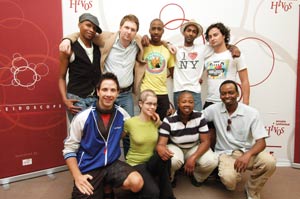 UCT was host to the third annual lesbian, gay, bisexual, transgender and intersex (LGBTI) Legotla from 3 to 7 April, which included the official launch of Kaleidoscope, a new national LGBTI youth-based network organisation merging groups from universities across the country.

UCT's LGBTI student group, RainbowUCT, in association with the Humanist Institute for Development Cooperation (HIVOS), the largest funder of LGBTI emancipation projects in the world, hosted the five-day event.

"Ultimately, we'd like to work ourselves into redundancy," says Lekgotla organiser Zayne Imam, a third-year accounting student at UCT. "We aim to fight against all forms of discrimination, not just LGBTI concerns."

The formation of Kaleidoscope came out of the recognition that individual campuses had a limited voice that could be strengthened by joining forces.

"It would be a big claim to say that Kaleidoscope is the voice of LGBTI youth, but that's what we're aiming towards," says Imam.

The Legotla was established three years ago for discussion of the social injustices and prejudice, based on sexual orientation, experienced by youth, and aims to develop ways to eradicate discrimination and hate crimes at tertiary institutions and the broader community.