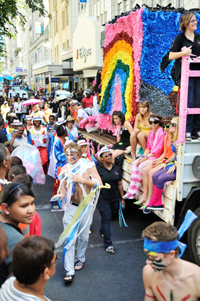 A gigantic Spongebob Squarepants was the showpiece of this year's annual RAG Floats Parade (left), which took place in Adderley Street in Cape Town on 28 March.

Twelve floats took part in the parade, which also included a "Where's Wally" float, dancing men in diapers and a marching band.

The RAG floats procession is an established Cape Town event, dating back to 1925.

As the parade rolls through the city streets, passers-by throw spare change at the floats and student "panhandlers".

It was originally known as Hospital RAG (Remember and Give), and all funds raised went to Groote Schuur Hospital.

These days, these funds, which can amount to anything between R5 000 and R12 000 (this year's collection is still to be tallied), are then passed on by RAG to UCT's Students' Health and Welfare Centres Organisation (SHAWCO).

The theme of this year's parade was "Where in the World–?" and featured floats from UCT residences and societies.