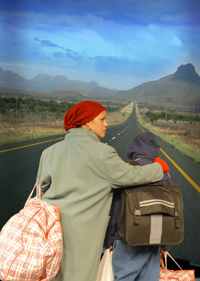 Coming Home is Fugard's first sequel, and follows on from his acclaimed 1995 Valley Song, which was also his first post-apartheid play.

It continues the journey of Veronica Jonkers, played by Van Graan, who has left the farm where her beloved grandfather (Hector) lived, to pursue a singing career in Cape Town.

Now, 10 years later, she returns with Mannetjie, her young son by a Mozambican migrant worker who was killed in a xenophobic attack. After his death, carrying a painful secret and a heart filled with disappointment, and with her own failing health (she is HIV-positive), it is time for her to return to her home village as she strives to plant the seeds of a new life for the boy.

"Athol often writes about the forgotten characters and people who live out of society," says Van Graan.

Coming Home has low-price previews from April 2 to 6, opens on April 7th and runs until April 25, Monday to Saturday at 20h15. Ticket prices range from R85 to R120, and the Baxter Monday special of R55 (light meal and show) applies.