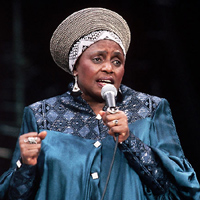 UCT joins the world in mourning the death of Zenzile Miriam Makeba, one of the country's finest divas and one of the university's honorary degree recipients.

The award-winning Makeba, affectionately known as Mama Africa, passed away in Italy on Sunday night after performing at a concert there. Her body is set to be flown home for the funeral service and cremation this week.

Makeba, 76, was awarded an honorary degree in music by UCT in 1993. She was born in Johannesburg on 4 March 1932. In 1959 she became the female lead singer in the musical King Kong. She grabbed international attention when she starred in the anti-apartheid documentary Come Back Africa. She then moved to London where she met US musician and social activist Harry Belafonte. He helped her get entry into the United States where she released many of her famous songs.

In 1960, Makeba was banned and forced into exile by the South African government, and was refused permission to return for her mother's funeral. In 1966, she became known as the darling of the American public after singing at John F Kennedy's birthday. She was also the first African to win a Grammy Award.

She was married to musician Hugh Masekela and then to Trinidadian civil-rights activist and Black Panther leader Stokely Carmichael, whom she married in 1968.

She returned home in 1990 at the request of former president Nelson Mandela. She is survived by two grandchildren, Zenzi and Nelson Lee.

Vice-Chancellor Dr Max Price has expressed sincere sympathies on behalf of the UCT community to the Makeba family, as well as to her fellow musicians and friends.