Robinson runs off with sportsperson award

William Robinson, enjoying a standout sporting year, was named as the UCT Sportsperson of the Year at the university's annual Sports Awards Dinner on 17 October.

Robinson took home the evening's top honour for a string of wins and podium finishes in local trail races, including top spot, with teammate Dion Middelkoop, at the 2007 Cape Odyssey, and for clocking the best combined time over this year's Cape Argus Cycle Tour and Two Oceans Ultra Marathon events.

Speaking after receiving the Jamison Cup from guest speaker Ray Mali, Robinson, now doing his PhD in mathematics, urged the younger students at the dinner to keep chasing their sporting dreams, and UCT silverware. "It took me nine years to win this trophy," he pointed out.

Robinson was not the only member of the Athletics Club to pick up an accolade on the evening. The women's distance running team, Western Province cross-country champions again this year, received the Butterworth Cup as Team of the Year. 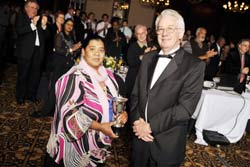 John Simpson, departing chair of UCT Sports Council, also presented the Chairperson's Award to the late Ish Dramat, the Rugby Club's legendary team manager, scorer, water-bottle carrier, rugby encyclopaedia and supporter of over half a century. (Ditto for the Cricket Club.) Dramat died on 27 May this year. His daughter, Fatima (pictured left with John Simpson), received the award on behalf of the family.

In addition, a number of students were honoured for winning provincial and international caps over the year. Another 16 students were presented with Merit Awards for their contributions to the administration of their clubs.