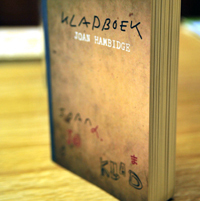 "Kladboek focuses on what happens to the writer when she writes poetry or conducts an affair," explains Hambidge.

"It's also a story of a love triangle. One of the characters completes the novel for the author, who has died in a car crash.

Different versions of writing are explored to 'blend' a story of the fabrication of a novel." Kladboek is published by Protea and is available in all bookshops.