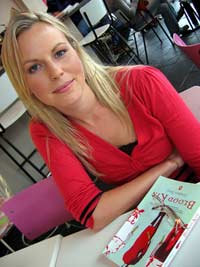 UCT graduate Ceridwen Dovey's debut novel Blood Kin - already winner of the 2008 Sunday Times fiction award and the University of Johannesburg Creative Writing prize for best book - is one of six to be shortlisted for the Dylan Thomas Prize for Young Writers.

The prize, worth £60 000, was created in honour of the poet and in "recognition of the way in which his youthful talent was nurtured in his native city of Swansea (Wales)."

The winner will be announced in November.

Originally from Pietermaritzburg and now based in New York, Dovey wrote Blood Kin as her dissertation for the masters in creative writing programme at UCT under the supervision of Professor Stephen Watson.

Blood Kin is a story of a president overthrown by a military coup in a nameless country, and in the midst of mass arrests, three members of the Presidential household - his barber, chef and portraitist - are taken hostage in a remote mountain palace. As the story unfolds the web of complicity and duplicity begins to unravel.

JM Coetzee has described the story as 'a fable of the arrogance of power beneath whose dreamlike surface swirl currents of complex sensuality'.