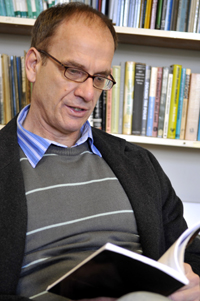 Professor Robert Cameron of the Department of Political Studies has won the 2004 Pierre De Celles Award from the International Association of Schools and Institute of Administration (IASIA).

The award is for the best paper presented at the IASIA conference in Seoul, South Korea, that year, and Cameron came top for his paper on Metropolitan Government Re-organisation in South Africa.

IASIA is an association of organisations and individuals whose activities and interests focus on public administration and management.

The accolade has always been awarded at the organisation's annual conference, and although suspended for a short while, it has now been reintroduced and backdated.

Cameron's paper was about the development of democratic metropolitan government in South Africa. He says his department is trying to improve the academic field of public administration, which is often viewed as a nuts-and-bolts discipline.

"We try to develop a more intellectual approach to the standard of public administration," he says. "Hopefully, the paper was a reflection of that approach."

Cameron, who is set to receive the award at this year's IASIA conference in Uganda, is currently working on a National Research Foundation project looking at the state of academic research in public administration.

"We want to create a more knowledge-based approach to the discipline," he added.