Dr Max Price, on his first day in office, was greeted with warm applause in the Jameson Hall on 1 July as he announced that this was his first official function as the Vice-Chancellor of UCT.

Price was the host and MC at the second Difficult Dialogues panel discussion, which is part of a series of talks presented by the Cape Argus and the Economic Justice Initiative. The talks aim to encourage ordinary South Africans to deliberate on the present state of their communities. 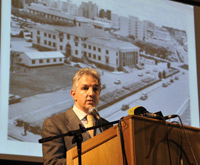 "Offering a protected space to debate issues is a key role of universities in democratic countries," said Price. Referring to the fact that this was his first event as UCT's Vice Chancellor, Price commented: "I couldn't think of a more appropriate event."

The topic for the second discussion was Zimbabwe, and the panelists included Archbishop Emeritus Desmond Tutu, former vice-chancellor of UCT Dr Mamphela Ramphele, Heidi Holland, author of the book Dinner with Mugabe and Professor Wilmot James.