The UCT Mathematics Competition, which took place at the university on 29 April, attracted thousands of learners from about 400 schools, with nearly 200 teachers assisting in some 50 venues across the campus.

The competition, which has been an annual campus event since 1980, is aimed at popularising mathematics among high schools in the Western Cape, and identifies promising students and offers them opportunities for further development of their mathematical talents. 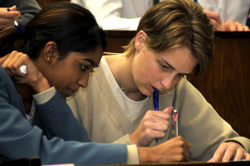 During the 75-minute event, students solve sets of problems that are appropriate to their school grade. Only one-third participate as individuals, with the rest working in pairs, hoping to demonstrate that two heads are better than one.

The 2008 UCT Mathematics Competition is sponsored by Africon and UCT's Faculty of Science and the Faculty of Engineering & the Built Environment, with additional prizes donated by Casio and Oxford University Press.

The prize-giving event will take place in May in the Baxter Concert Hall.